Last month we covered a bit of pathophysiology, presenting clinical signs and the radiographic diagnosis of gastric dilation and volvulus (GDV).

Now we cover the three things you need to do as soon as a suspected patient is presented. As discussed, you can often make a presumptive diagnosis without radiographs based on supportive presenting clinical signs and signalment.

Depending on the number of staff you have available, all of these can be performed simultaneously. If not, follow the above order as shock is the most imminent problem.

Fluid resuscitation is relatively straight forward. Most GDV patients will be in some degree of shock, varying from mild to severe. Regardless of the actual degree, ALL patients will require IV fluids.

The placement of IV catheters is particularly important; their numbers and diameter will influence the rate of response to treatment. Large bore catheters allow faster flow of fluids compared to smaller ones, while multiple catheter can allow concurrent delivery of two bags of fluids as opposed to one – particularly important in large dogs. Therefore, always attempt to place the largest catheters possible (i.e. 18g or larger for large breed dogs) into the cephalic veins. 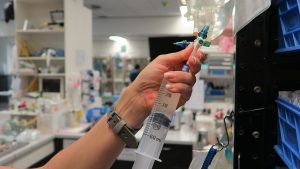 Once the catheter(s) have been placed, collect approximately 2-3ml of blood for baseline measurements. These can be collected directly from the catheters. These should include:

Once the baseline bloods have been collected, fluid resuscitation should commence immediately.

How Much, How Fast?

So how much fluid and how fast should you deliver it? My go to fluid is crystalloids and I generally start with a 20ml/kg bolus of an alkalinising crystalloid such as Hartmanns or Plasmalyte 148. I perform bolus therapy, so 10 to 20ml/kg fluid doses rather than shock rates 90ml/kg/hr as I feel it allows me to better titrate my fluid therapy to effect. It also helps minimise excessive fluid administration and the problems with haemodilution such as anaemia, hypoproteinemia and prolonged coagulation times.

As fluids are being delivered I administer pain relief and commence gastric decompression.

The decision to administer more fluids depends if I have achieved some end point resuscitation variables such as:

Improvement in mentation is not often reliable as the sedative effect of analgesia (which I generally give during fluid resuscitation) often confounds this effect.

If there is still evidence of shock despite the initial fluid boluses and gastric decompression, I will then consider more fluids.  This can include hypertonic saline or colloids.

In my experience, a repeat of a smaller dose of crystalloid fluid bolus is often adequate (10ml/kg). The transition onto hypertonic saline (7% solution) or colloids is influenced by the results of the baseline diagnostics mentioned previously.

A reduction in PCV/TP suggests blood loss, in this case I will consider hypertonic saline (3 to 5ml/kg of 7% solution) or a dose of colloids (5ml/kg of Voluven) or even blood products such as whole blood or packed RBCs.

If there is significant prolongation in activated clotting time, likely from consumption, then I might incorporate fresh frozen plasma into my fluid therapy. This is in anticipation of possible surgery where prolonged coagulation times can not only be troublesome but life threatening.

A quick note on lactate; I don’t use the baseline reading as a prognostic indicator or an indicator of gastric necrosis. This is supported by recent findings that: it is not the level of lactate that is predictive, but rather, the degree of improvement in response to fluid resuscitation and gastric decompression.

I have seen unreadable lactate levels (greater than 15mmol/L in patients who returned to reasonably normal levels within an hour of stabilizing. These patients also went on to survive surgery.

After starting IV fluid resuscitation, I generally administer pain relief whilst the team is preparing for gastric decompression. To keep things simple I stick to an easily accessible pure opioid agonist, such as methone at 0.2mg/kg intravenously. I avoid subcutaneous or even intramuscular administration as the patient is often in shock; the peripheral blood is shunted centrally to the heart and the brain and absorption can be variable.

I find it offers a reliable and great degree of pain relief which helps reduce anxiety levels and consequently, reduces oxygen demand. It has minimal cardiovascular effects and the mild sedative effect also helps with the process of decompression.

Dr Gerardo Poli is an Emergency Veterinarian and Director at Animal Emergency Service in Brisbane, Australia. He is author and creator of the MiniVet Guide To Companion Animal Medicine and Clinical Pathology Flashcards. He is passionate about mentoring, coaching and inspiring the future generation of vets throughout the world.

Want to Buy in Bulk?

You can purchase up to 9 copies of the books and veterinary flashcard sets. Up to a maximum of 15 mixed products can be added to the cart. You can save up to 20% by sharing postage costs.

Grab friends and colleagues to organise an order of 10+ of each product, for further bulk discounts.